At the beginning of the new year, the appearance of "COB small-pitch LED" has brought a refreshing look to the industry, breaking through the competition of manufacturers who are "smaller and smaller".

This also means that for the entire LED display market, LED products are no longer divided by different pitches. Different packaging technologies have become another key to distinguish and select LED products.

Enter the indoor market, the advantages of small pitch LED

At the beginning of the LED products, due to their inherent characteristics such as high brightness and beautiful colors, they are stable in the outdoor market, but rarely in the indoor field. However, with the development of technology, the appearance of small-pitch LEDs (below P3.0) has made LED indoor applications a reality.

From a technical point of view, although the current small-pitch LEDs still have problems such as long-term, continuous viewing and vertigo in indoor applications, it is undeniable and has its inherent advantages.

The first thing to do is "seamless". From the perspective of visual effects, small-pitch LEDs can be seamlessly displayed on the whole screen, and the picture is more complete.

In addition, for indoor large-screen projects, space and area are often limited, while small-pitch LEDs are light and thin, and the thickness of the screen is less than 100mm, which is more space-saving.

Moreover, the small pitch LED has high brightness, and its brightness can be arbitrarily adjusted between 350 and 2000 cd/m2, and the adaptability to ambient light is stronger.

Finally, the small-pitch LED has a wide color gamut and a color gamut of 114% NTSC. The color is more beautiful, especially suitable for indoor scenes such as auditoriums, demonstration halls, and TV studios.

From SMD to COB, the leap of LED technology development

Previously, for users, the choice of small pitch LEDs was more of a choice between different pitches, while the pitch primarily affected the resolution per unit area for small pitch LEDs.

This also shows that on the basis of solving the problems of indoor use and usability, the development of small-pitch LED has entered the stage of providing higher product reliability and visual experience. COB packaging is one of the most critical technical directions.

Changchun Xida Electronics is one of the main forces to promote the development of flip-chip COB small-pitch display. It is reported that Hida Electronics' sales of COB display in 2018 has reached 280 million. In the industry's sluggish environment, it has continued to grow substantially against the trend. Currently, the monthly COB display has reached hundreds of square meters. 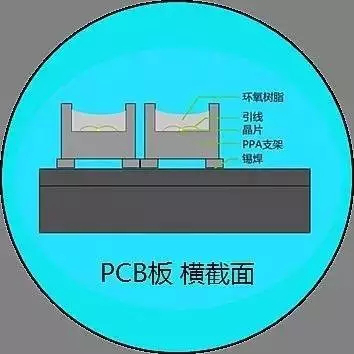 ① Dead lights, bad lights. The LED dead light directly affects the display effect of the screen, and the small-pitch LED with SMD packaging technology is very easy to produce dead light and bad light during use.

This is first because SMD small-pitch LEDs need to be soldered to the board with high-temperature reflow soldering (240-270 degrees Celsius) during the production process. In high-temperature reflow soldering, the brackets, substrates, and rings in the lamp bead are used. Oxygen resin and other materials have different expansion coefficients, which are prone to gaps, which cause the lamp bead to be in a "sub-health" state at the factory.

Secondly, with the SMD packaging technology, the exposed light pad of the LED is easily oxidized, causing water vapor to invade the internal chip of the LED. The long-term operation under the action of water and oxygen causes an electrochemical reaction inside the wick, and a dead lamp and a "caterpillar" phenomenon appear.

In addition, the damage of static electricity to LED lamp beads can not be ignored. Small-pitch SMD products are electrostatically sensitive, and bare lamp pads are susceptible to static electricity, causing dead lights.

Generally speaking, the manufacturer will control the dead point rate within the standard value at the factory; however, as the usage time goes on, the dead pixels will accumulate, and the dead point is usually obvious after half a year. How to reduce the dead light rate has become the primary problem to be solved by small-pitch LEDs. 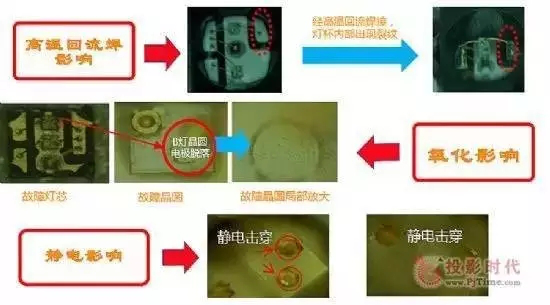 Analysis of the causes of SMD bad lights

②Poor viewing comfort. In terms of viewing comfort, the human eye will periodically receive light signal stimulation due to frequent refreshing of the LED screen body, and it will feel uncomfortable for long time viewing and close viewing.

In addition, there is a “blue hazard” effect. Because the blue LED has a short wavelength and a high frequency, the human eye directly and long-termly accepts the influence of blue light, which is likely to cause retinopathy.

③Gray scale is not good when low light. In outdoor applications, the brightness of the LED display naturally has an advantage. However, in normal indoor applications, the brightness of the large screen is generally comfortable at around 200 nits for a long time. However, under this brightness, the LED display will have a gray scale missing, which will affect the image quality. COB products, innovation of small pitch LED

COB (Chip On Board) is a kind of packaging technology, that is, RGB chips are packaged on a circuit board, and the wafers and leads are directly packaged on the circuit board by silicone resin, thereby eliminating the lamp bead package, patch, and reflow of the SMD package. Welding and other processes have greatly improved the stability and viewing comfort of small-pitch LED products. 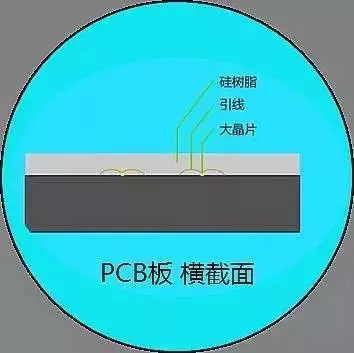 ① More reliable performance. COB small-pitch LED products without lamp bead packaging, reflow soldering, and patching processes have greatly improved their stability and can effectively avoid the defects of more and more traditional SMD package defects. It has been estimated that the cumulative dot-break rate of small-pitch LEDs using COB packaging technology is less than one-tenth of that of SMD technology after about half a year of use.

Comparison of moisture resistance between SMD and COB

The popularity and application of a new technology, the maturity and recognition of a new product, can not be separated from the test of the market, but also the user experience, COB small-pitch LED products. As more and more customers go to the Weichuang demonstration hall to experience and feel the COB small-pitch LED, the person in charge of the market has also answered the questions that users and even the whole industry are generally concerned about.

Is one COB not well maintained?

The cumulative bad light rate of COB is less than one tenth of SMD. It can be said that “almost no maintenance” is used in one product life cycle. Even if maintenance is required, it can be maintained by the manufacturer's professional and replaced with the display unit. Therefore, no matter whether it is maintenance cost or operational difficulty, there is no problem that COB is more difficult to maintain.

Is the second COB not good for heat dissipation?

Is its three COB consistency affected?

In this regard, Wistron has solved this problem, and applied for a patent, combined with the special laminating process of Wistron DLP screen to solve the problem of ink color consistency, ensuring the overall wall display effect of COB small-pitch LED products.

Based on the advantages of higher stability and more comfortable viewing of COB products, Weichuang has successfully built a number of COB small-pitch LED projects, covering application scenarios such as public security, energy, power command and dispatch centers, and TV studios. For control room users, the high stability and viewing comfort of the COB is more in line with the long-term display requirements of the control room users. Due to the anti-molybatic characteristics of COB technology itself, it can be said that it has solved a long-term problem of small-pitch LED application in the broadcasting and TV industry, and has been unanimously recognized by the broadcasting and television studio field.

It is key to show that the industry provides value to users. With the advent of different packaging technologies, the choice of small pitch LEDs is no longer just a matter of distinguishing between different distances. The emergence of COB small-pitch LED products can be said to provide users with another selection dimension and consideration criteria, and of course, a better choice for stability and viewing comfort.